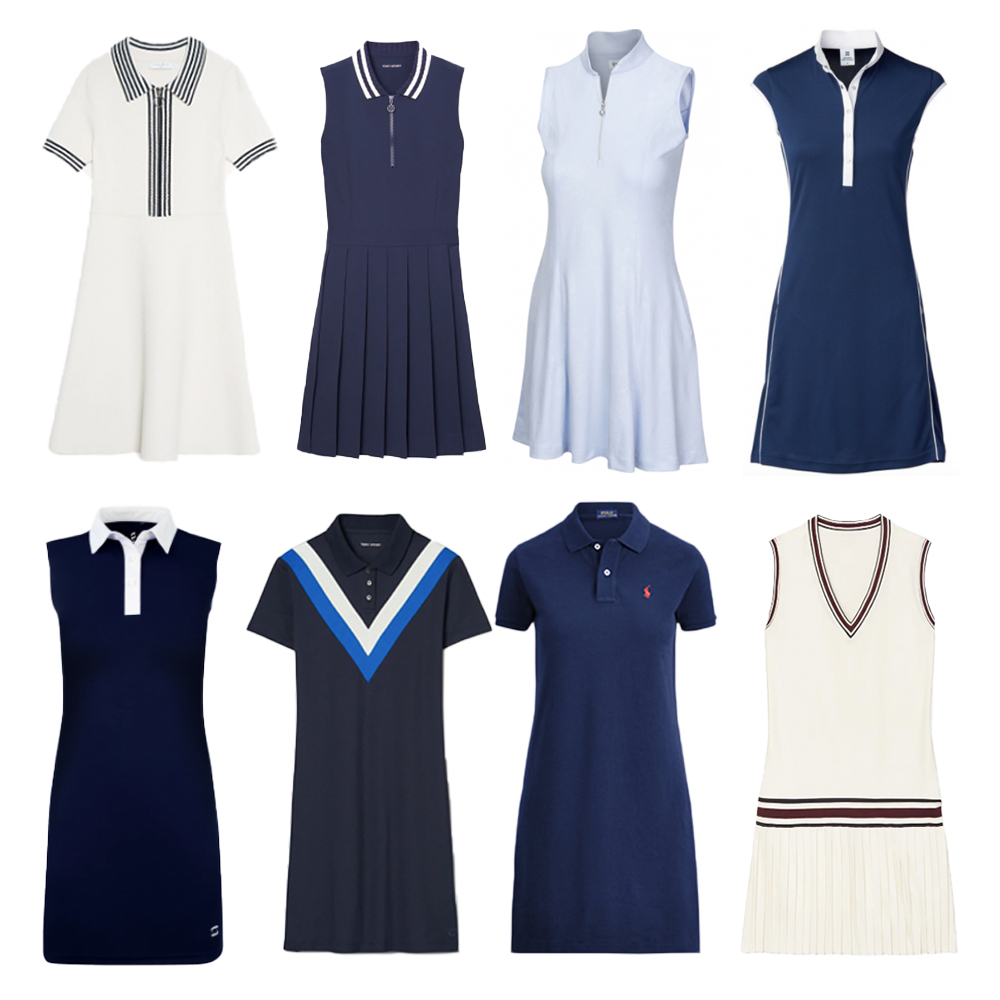 Over the past year, the clothing industry has been offering us more casual options—at least in the U.S. I visited J.Crew about a month ago and observed that loungewear accounted for 100% of the new merchandise. I don’t lounge that much, I thought. The hours between 9:00 AM and 5:00 PM aren’t for sweatpants.

I prefer to save athletic wear for workouts and loungewear for evenings at home on the sofa. Most of the pieces in my closet are structured—pleated skirts, button-ups, and sheath dresses. I generally favor clothing that retains its shape on the hanger, but my work-from-home routine warrants clothes that are a bit more casual. I acquired a few pairs of shorts last summer, but I’m starting to consider my warm-weather, work-from-home options early this year.

What’s comfortable, cool, polished, suitable for answering the door, going for a walk, and jumping on a Zoom call? The athletic dress seems to fit the bill. I don’t mind looking like I’m going to the country club. Instead of court or golf shoes, I’ll be wearing my Superga sneakers. 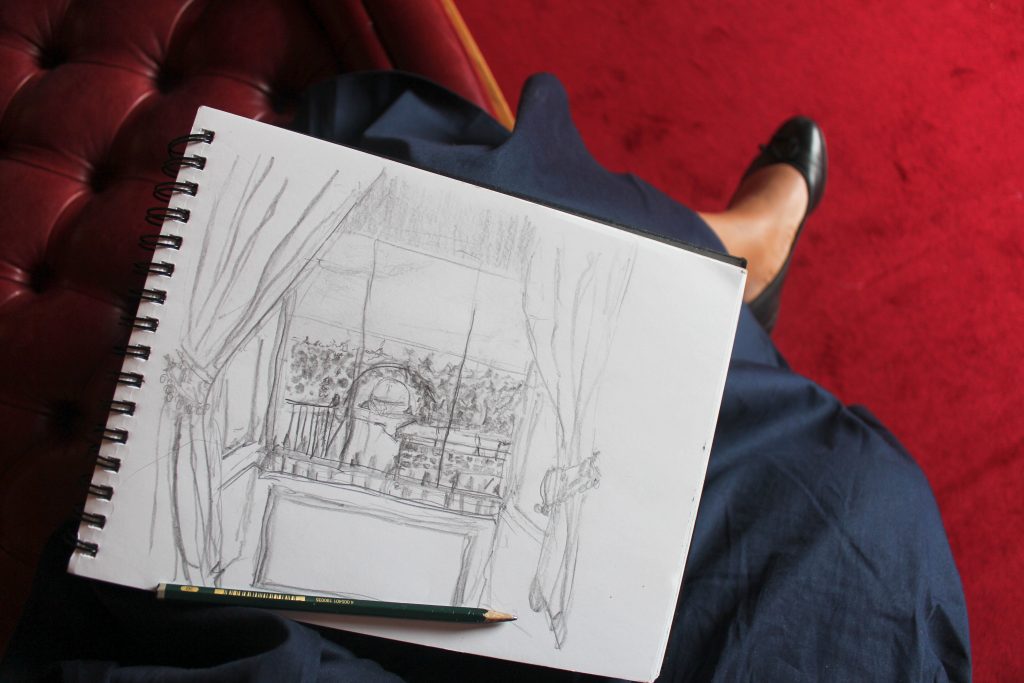 I’ve been thinking about how I’m going to keep myself occupied during the approaching warm-weather months. According to the calendar, spring will be here in 29 days. There’s no telling what lockdown/curfew restrictions could be implemented this year, and I want to be mentally prepared. I live in the city, and like many other city dwellers, I don’t have access to a private outdoor space larger than a postage stamp. This means that most of the time I spend outside is in the public sphere. If access to the public sphere is restricted, I’m not left with very much. Here’s my preliminary list of things I plan to do this spring at home and/or outside when permitted. A woman can’t live on outdoor dining and online shopping alone. 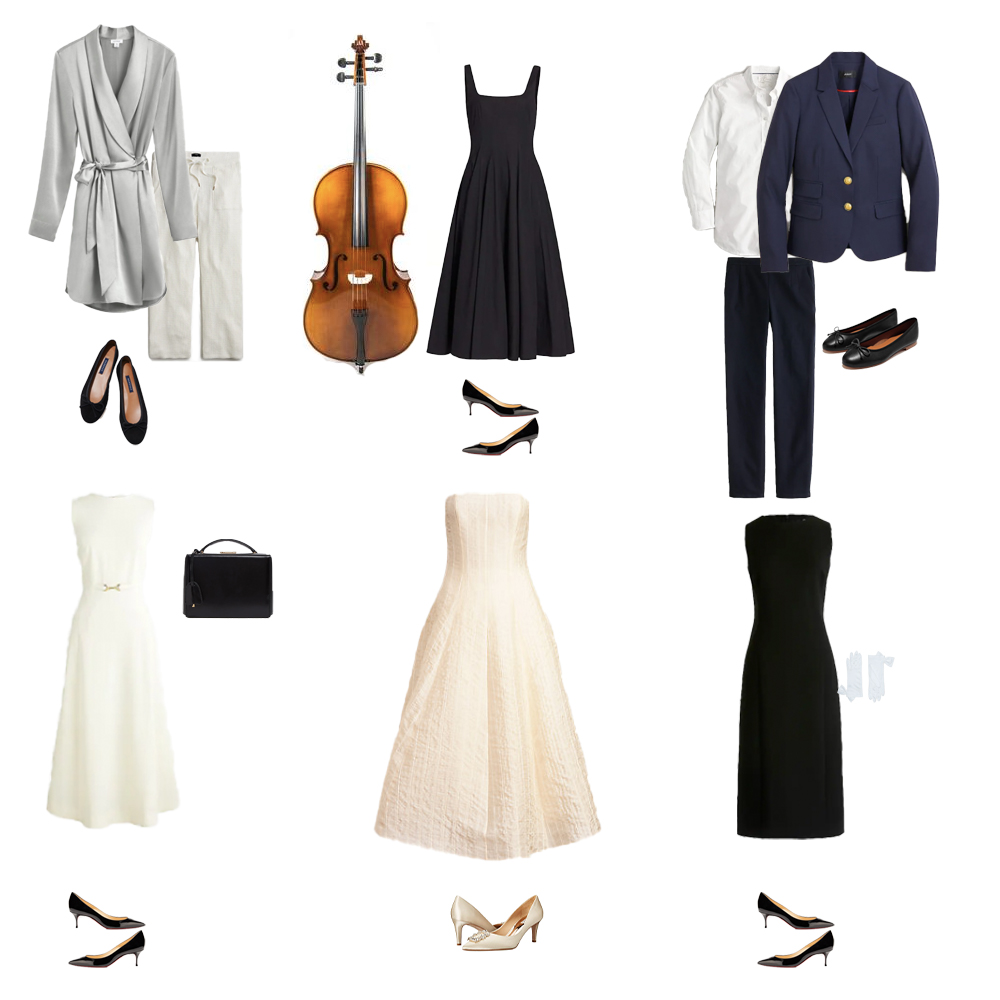 Ariane Chavasse (Audrey Hepburn) rescues business magnate Frank Flannigan (Gary Cooper) from his own demise in Love in the Afternoon (1957). The daughter of private detective Claude Chavasse (Maurice Chevalier) leafs through her father’s infidelity cases with romantic, rose-colored glasses. She initially encounters the American Frank as the subject of a surveillance photograph taken by her father. A devoted cellist, the young French woman can be seen carrying her instrument in and out of the Ritz Paris. Here’s her wardrobe reimagined (cello included).

How to Steal a Million: Nicole Bonnet’s Wardrobe 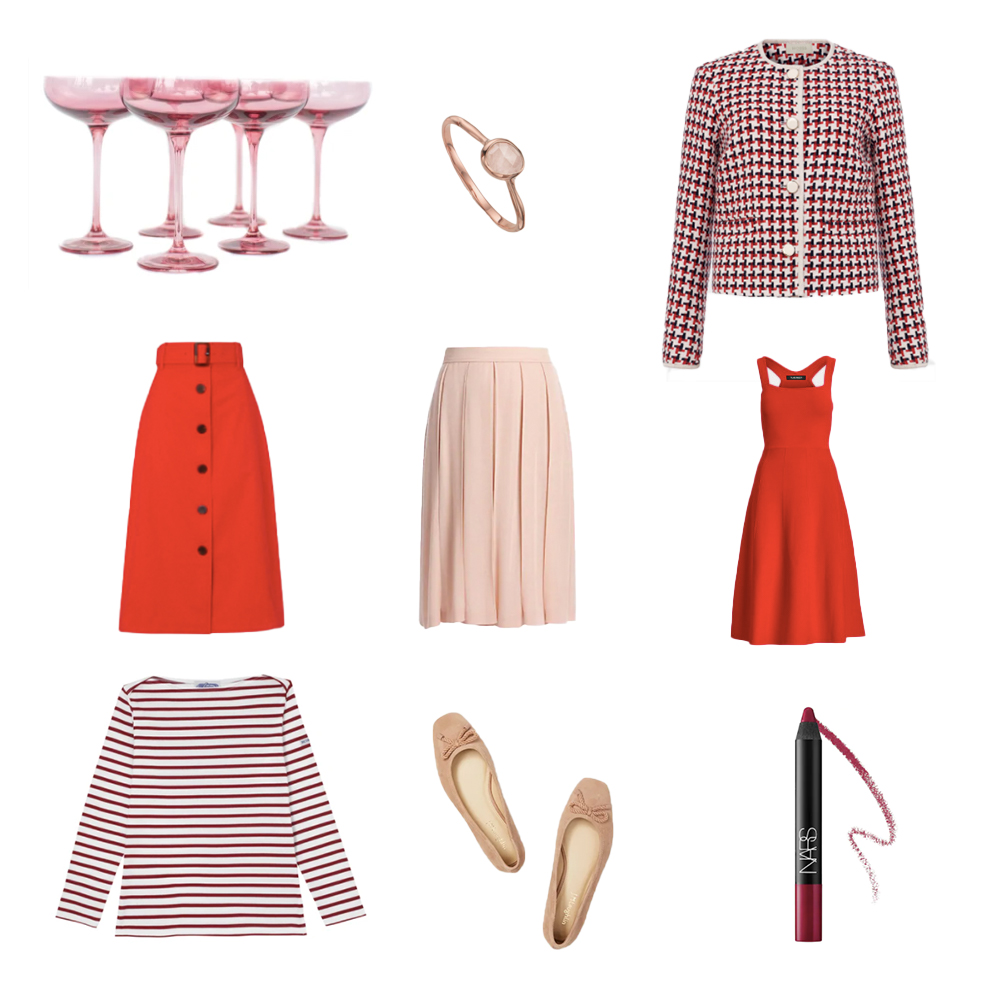 It’s been such a pleasure to visit the Estelle Colored Glass instagram account lately. The company has been promoting their pink and red handblown glass products for Valentine’s Day. The festive colors remind me of celebrations from days long gone. With nostalgia in my heart, I took to the internet in search of additional sources of inspiration. 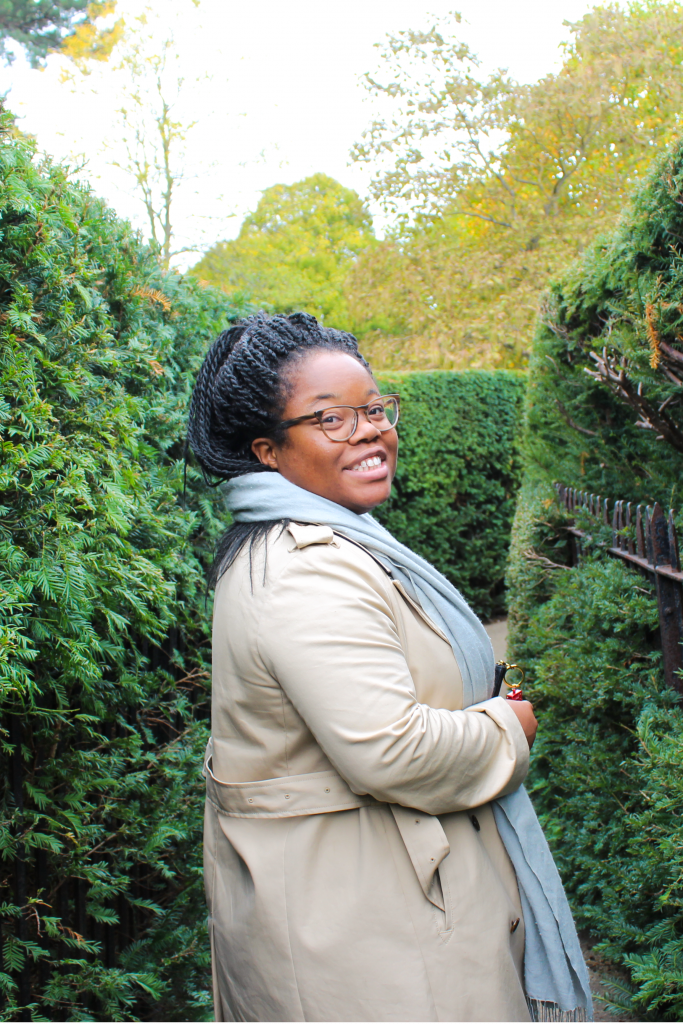 The Dictionary of Fashion History (2010) defines the term pashmina as a lightweight cashmere scarf. While the Persian word pashm refers to wool in a broader sense, in the region of Kashmir, the fibre comes specifically from the underbelly of the Changthangi goat. In the UK, the woven fabric as well as shawls made from it were called pashmina in the mid-19th century. The modern pashmina may be sourced from other breeds of cashmere goats outside of the Himalayas. A cashmere/silk blend is permissible, but I wouldn’t included cotton and viscose products under this definition.

I purchased my grey pashmina from The Portobello Road Cashmere Shop in 2013. I’d set out for Portobello Road that autumn day with the intention to window shop at the market, but the cashmere scarves on display at the shop’s outdoor stall caught my attention. After surveying the selection, I still hadn’t found the one. But then, I was directed inside the brick and mortar location at number 166, and I found the pashmina that was meant for me there.

The light grey style bears the tag of the shop’s private label Eldon Cashmere, which, along with the shop itself, was established in 1997. Although the brand specializes in Scottish cashmere, my pashmina was hand made in Nepal. It’s 70% cashmere / 30% silk, lightweight, voluminous, and warm. I wore it almost every day when I lived in London. Now that I’m based stateside now, I don’t fly without it. When it comes to the cost per wear formula, I am undoubtedly the victor, especially since I wash it in a bucket of cold water and Woolite instead of paying for dry cleaning. 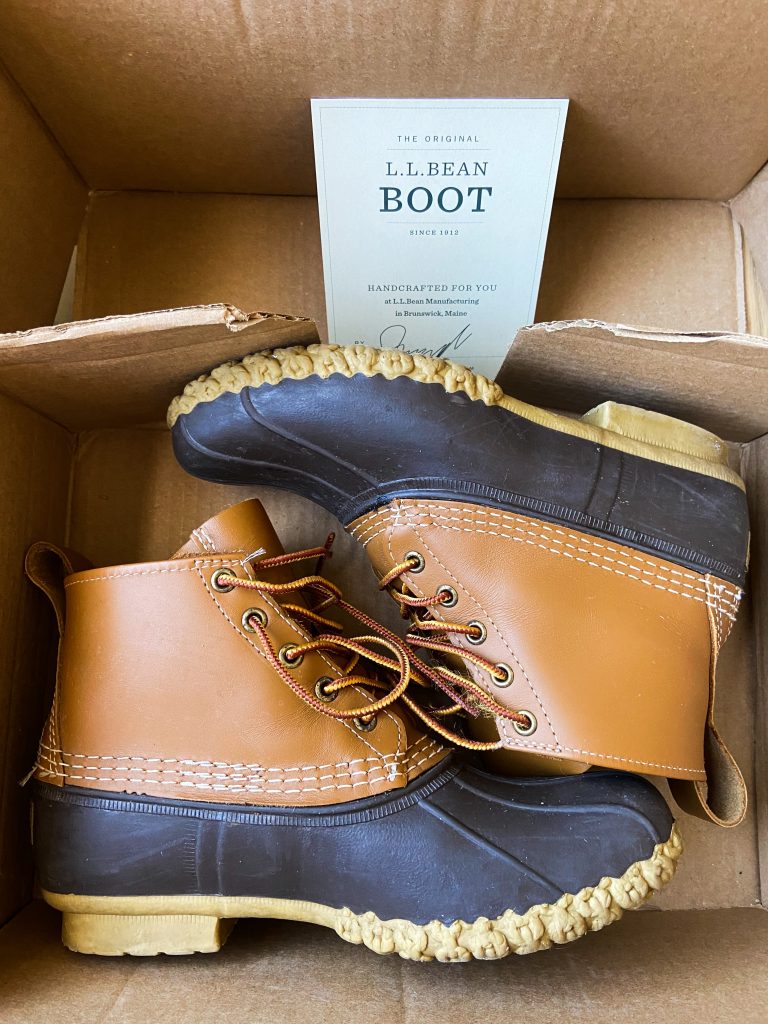 As I mentioned in my post on the parka, dressing for the weather is the first step to enjoying it. This mantra should be applied to every type of weather, but I find that the colder months present more style-related challenges. Today we’ll discuss the L.L.Bean boot. I’ve owned the same pair of 6″ duck boots since 2017, and so far, I haven’t found another type of winter-appropriate footwear that is equally practical outside as it is inside. Prior to working remotely, I’d often leave them on after my daily commute. The rubber sole, leather upper, and gold and tan laces pair nicely with the classic tights/woolen skirt/button-up combination.

I tend to wear my Bean boots when there is either snow on the ground or an imminent threat of it. Winter in the Mid-Atlantic is mild compared to the season in New England, and I’d probably own several pairs of Bean boots if I lived in Boston (one of my favorite U.S. cities). There are a number of linings available for addition insulation, such as shearling and Thinsulate, but I find the style sans lining suitable for the weather in PHL. I’ll wear them with a pair of J.Crew camp socks on colder days or a tall sock of standard weight in warmer winter temperatures. Every winter I turn to the same pair of boots to get me through the elements. Eventually, I’ll have to get them resoled, but for right now, they still look good as new.

Letter From the Editrix