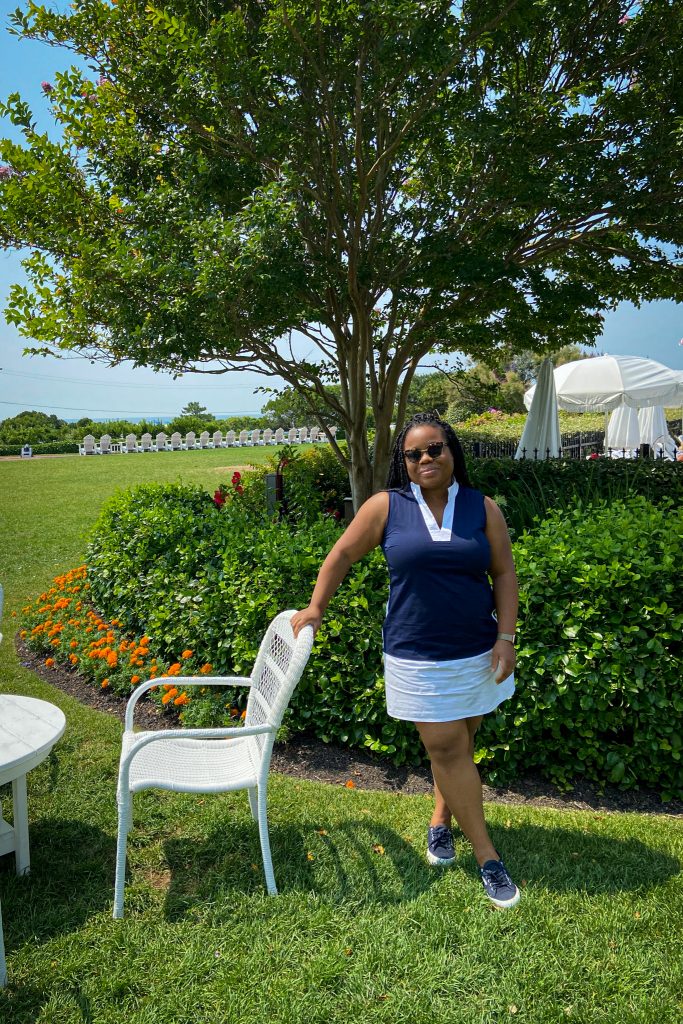 A thrift shop is a treasure chest. You never know what you’re going to find, which is why it is best to visit frequently. I don’t go to secondhand shops as often as I would like. Thus, I have to remind myself to exercise a little restraint on trips like these. How do I shop intentionally in a store full of bargains?

First, I allow myself to pick up any and every item that speaks to me. If I bypass something that piques my interest, someone else might scoop it up (and we can’t have that). I see the other shoppers as my opponents, and from the moment I enter the store, I am competing with them for the best finds.

After hunting and gathering to my heart’s content, it’s time to edit. I’ve found it helpful to research products by brand name on my phone. On my last trip to Goodwill in May, I returned a set of teacups and saucers to the shelf when I discovered they contained lead.

After letting go of items that I don’t have any use for, it’s time to edit again. I hold each item and, à la Marie Kondo’s method, ask myself if it sparks joy. If I’m in possession of any excessive products at this point, I return them to their original places.

Finally, I evaluate how the item(s) I am left with will fit into my life. At the end of my last excursion to Goodwill, I walked away with a Sail to Sable dress for US$ 25. The original tag read $198, and even after paying $50 to get it tailored, I still consider the price a bargain. (The vertical, white inserts on the sides were added to allow for more hip room.) If I factor in cost per wear, the dress was practically free. I’ve been wearing it several times per week and intend to do so for the rest of the summer. It gets washed in a bucket and hung to dry between laundry loads. 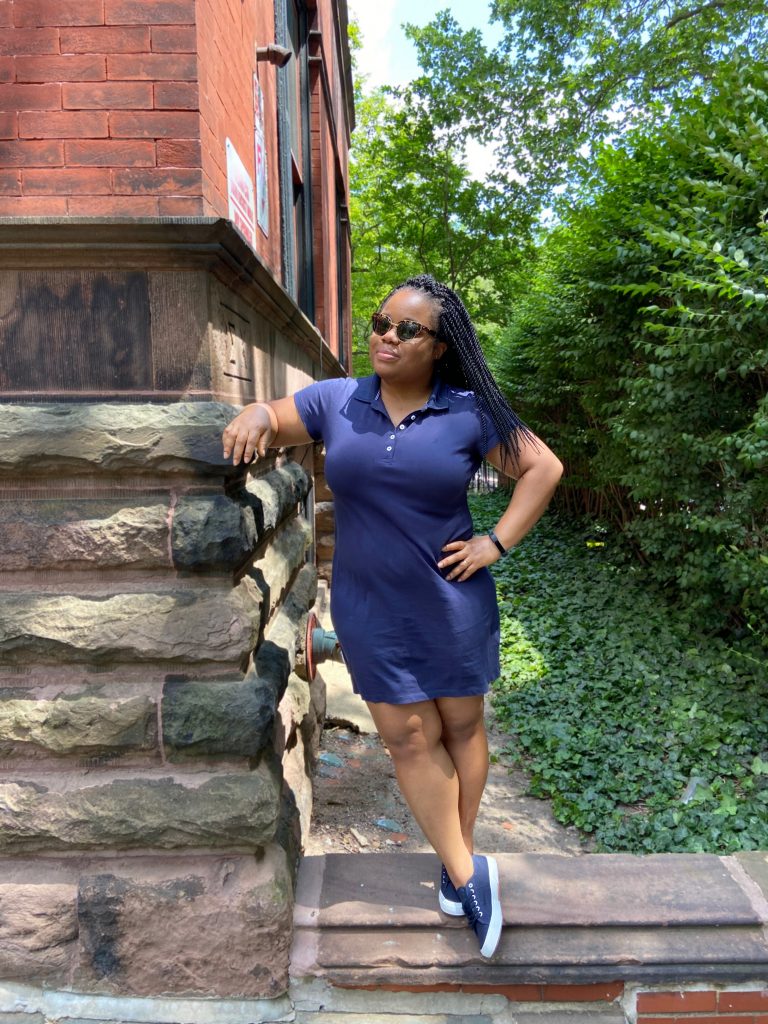 You’ll recall that I started searching for casual warm-weather dresses in February. For me, the ideal dress was comfortable enough for lounging but also polished enough for the brunch table. The athletic/athleisure dress offered the best of both worlds. I considered a wide range of options and eventually settled on a polo shirt dress by Nautica. It first appeared on the blog last month when I paired it with a skirt. Having purchased five of these dresses (3 navy, 1 black, and 1 white), I can confirm its 4.6/5 stars on Amazon were rightfully earned. My only qualm: The white dress is a little see-through and should be paired with the appropriate underthings. Overall, this dress is very versatile, comfortable, and the fabric is forgiving and breathable. Add a pair of Supergas or espadrilles, and my summer uniform is set. 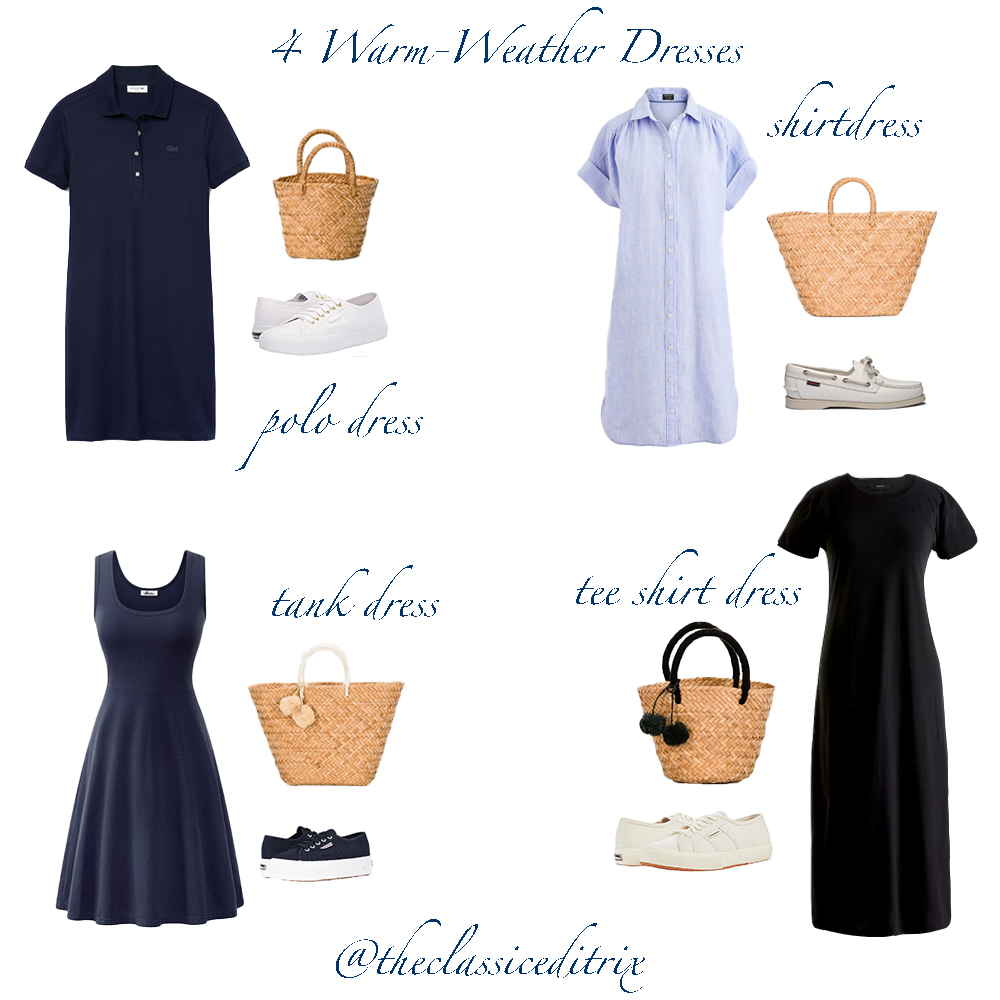 Yesterday my travels took me to the center of PHL, also known as Spandexville. Many of the ladies who were out and about had used the warm weather as an excuse to show off their tight crop top and shorts sets. The college students were in their denim shorts and spaghetti strap tank tops. If I didn’t know the geography of Philadelphia, I would have thought there was a beach nearby. I took my habitual lap around J.Crew Liberty Place and spotted the new linen shirtdress I’d seen online. I thought to myself, There’s some people I’ve seen on the street who need this. This particular selection of dresses is intended to save you from pulling something unbecoming from your closet. (Although, I really hope that you don’t own a spandex shorts and crop top set.) Consider the polo dress, shirtdress, tank dress, and tee shirt dress for casual wear. Save the spandex for the gym. If your gym isn’t located inside of your house, remember that it’s not the beach. 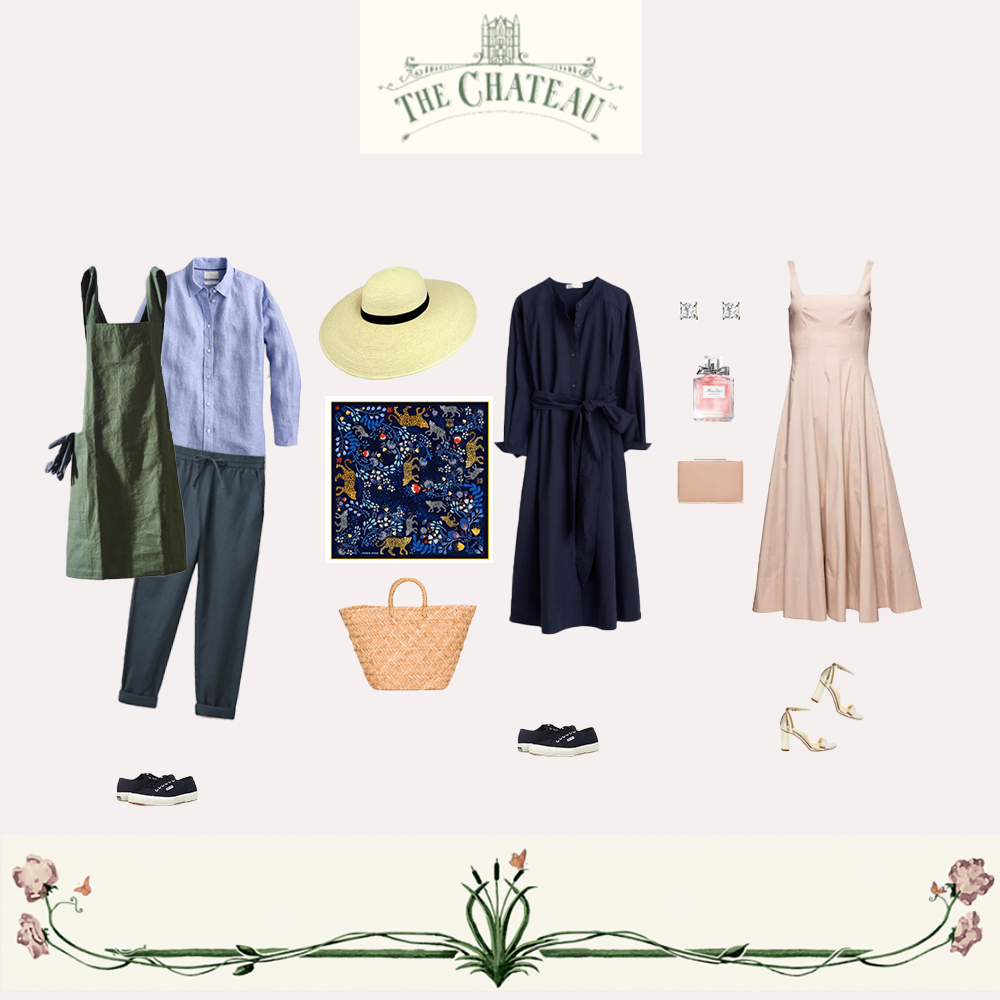 You’ll recall that a bottle of Chateau du Petit Thouars Crémant de Loire prompted me to travel virtually to the Loire Valley this past November. Visiting the makers of my favorite Crémant has been on my to-do list since the holiday season, but Channel 4’s Escape to the Chateau is starting to inspire a full-scale Loire Valley itinerary. I’ve recently added Château de la Motte-Husson to the list of stops.

The nineteenth-century house is a two-hour drive from the Château du Petit Thouars, but stops in Tours, Angers, Le Mans, and Laval are bound to extend the trip north by a few days. The venue is available for hire during the wedding season, but its owners offer other opportunities to see the chateau first-hand. I envision myself taking part in the gardening days and food-filled festivities. The grounds are also outfitted with pods for glamping.

It has been a joy to see Dick and Angel Strawbridge transform this 45-room house. I’m currently on episode 3 of season 3, and there are 7 seasons in total. If you’re in the UK, you’ll be able to watch via Channel 4, but as a resident of the US, I’ve been tuning in via Peacock TV. Dick and Angel are such a creative team! I can’t predict what improvements I’ll bear witness to next, but I’m sure I’ll find myself in awe several more times as the series progresses. 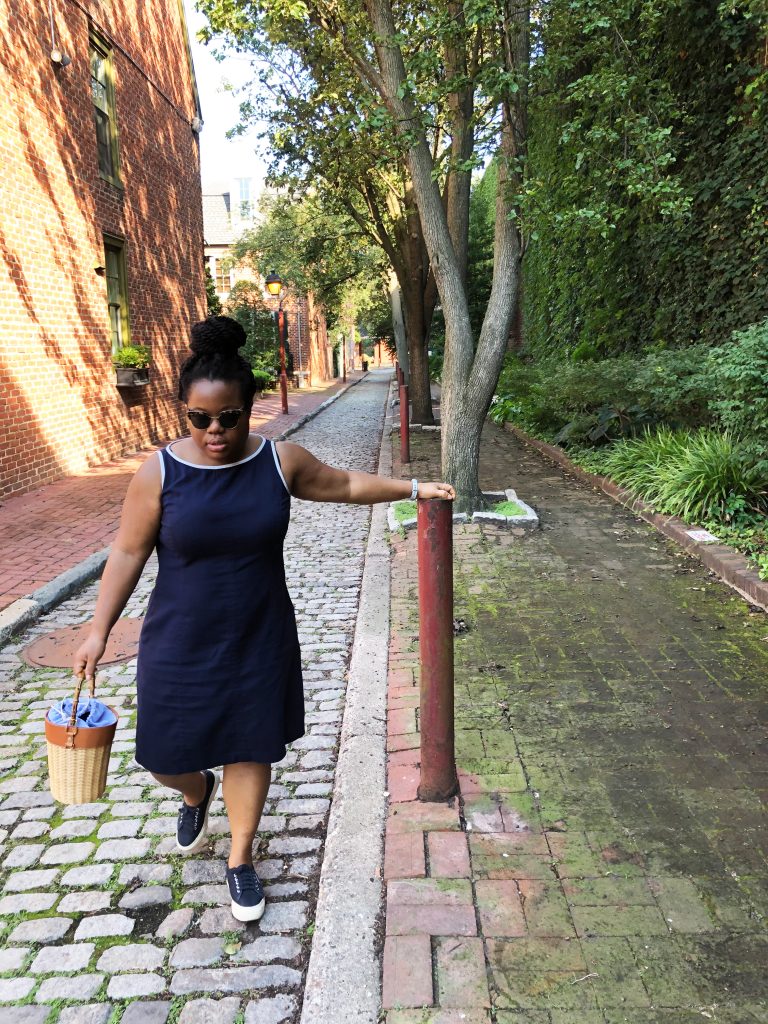 Establishing a color palette is an essential aspect of developing your personal style. A wardrobe’s palette is made up of base colors, accent colors, and patterns (note: I’m not going to acknowledge prints on this blog unless they’re on silk scarves). The base colors are the ones that appear in your lineup most often. Unless you are Elle Woods, your base colors are probably neutrals (as they should be). Their job is to anchor your outfits while the accent colors and patterns add interest to the mix.

If you’ve read Develop Your Personal Style with These 3 Habits, you’ll recall that you can discover a lot about your clothing preferences by window shopping. To uncover your color palette, observe the hues that appear in your wardrobe. If you are overhauling your closet, think about your ideal clothing selection. Rank the colors according to quantity in a hierarchy pyramid. Whatever color(s) you see on the bottom of your pyramid is the base of your palette. The colors that appear less often are the accent colors. I’ll illustrate this point using my own palette as an example.

Blue, specifically navy, is my primary base color, followed by black. I incorporate white, cream, camel, and grey into my wardrobe too, but I don’t consider them base colors per se. They exist somewhere between the base and accent categories. I’d wear all navy or all black but probably wouldn’t wear a monochrome outfit in white, cream, camel, or grey. My true accent colors are purple, pink, red, and (occasionally) green. The shades I favor within these five color groups pair well with one or both of my base colors. The same is true for my selection of stripes, seersucker, gingham, and occasional polka dot.

Establishing the base colors of your wardrobe will make getting dressed a lot easier. Not only is navy the primary base of my palette, but it is also the one I feel most powerful in. It’s not out of character for me to wear five navy dresses in one week. In fact, I’ve even been know to wear the same dress on two consecutive days, washing it in a bucket between wears. 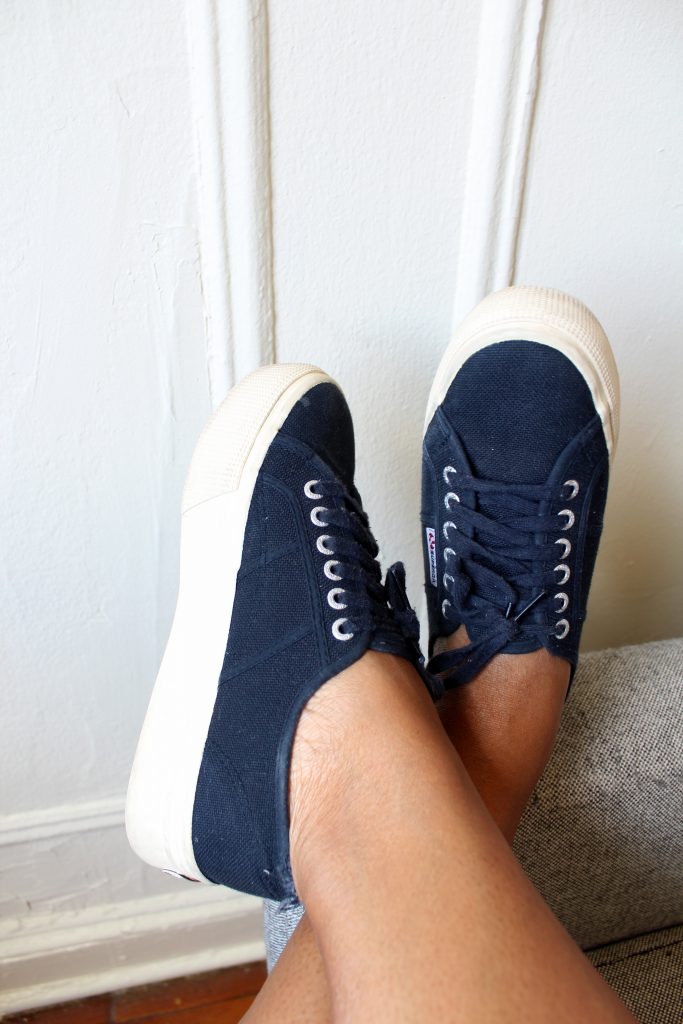 If you haven’t read the preceding post on the Superga 2750 Cotu Classic, have a look at it before diving into this one. Unless you’re a Spice Girl, I recommend getting acclimated to the Superga 2750 before acquiring the Superga 2790. In the preceding article, I discuss the comfort of the 2750’s 1-inch, vulcanized sole, which cushions the impact the wearer receives while walking. The sole of the 2790 is half an inch higher than that of the 2750, and, although you may not think a half inch would be significant, traversing the pavement in the 2790 is equivalent to walking on air. I am especially grateful for them when I am on my feet all day.

That being said, there’s one caveat. While the 2790 is exceptionally comfortable, I can’t wear them every day like the 2750. I tried wearing them every day for three weeks in 2018 whilst hopping around the U.K. My feet hurt after a week, and I had to buy a new pair of sneakers without a platform. However, let it be known that I was probably averaging 30,000 steps a day during this period—far more than usual. I’m still wearing my first pair of 2790s, which I purchase in September of 2018. The heels are a little worn down, but I haven’t replaced them yet. In contrast, I wear down several pairs of 2750s each year.

Originally, I ordered the 2790 in white, black, and navy. The white version looked like boats, and I decided against them. When it came down to choosing between the navy or the black, I gravitated towards the navy pair. I wondered if it made sense to own both the 2790 and the 2750 in the same color. Then, I came to my senses. You can never have too much navy.

Like the 2750, the 2790 is extremely versatile. I wear this style with skirts and dresses in lieu of heels. They also look amazing with skinny pants. I’ll now reiterate some points from my Superga 2750 post that also apply to this one. It is important to lace and tie these shoes during the fitting process. Your size in the 2790 and 2750 will probably be the same; this is true for me. They don’t have arch support, but the comfortable sole is fair compensation. You’ll have to break them in, but the process isn’t terrible. Don’t attempt to meet your 15,000-step Fitbit goal in these shoes during the break-in period. If you buy them in white, you may clean them in the manner descried in the preceding post. I wear Bombas socks with these too. Lastly, the 2790 is the most affordable platform sneaker of quality that I’ve found. I’m not paying $200 for a sneaker that can’t be resoled.